Text and Photography by Hans Klein We were walking near the beach when my new friend said, ‘I threw a rock through the window of that place.’

The apartment complex was egg yolk faded and sun fried.

‘I loved a girl who lived there.’

‘This was before Jen. I was in college and I really loved her.’

Jen was his wife.

‘I could go full weeks without a bad thought. Then one night she told me she was fucking someone else.’

Waves were crashing in the distance and someone on a Segway rolled by.

‘She left that night, but I had a feeling. She’d been working with a professor we both had classes with, and I knew where he lived because he hosted dinner parties for students. I’d had a few beers by that point, so I walked over to his apartment. The light was on. The curtain was partially closed. I waited until I saw the two of them in there, and that’s all I needed. I picked up a rock and threw it at his window. I didn’t see it break, but I heard the shatter when I started to run.’

I said, ‘Sounds like you loved her a lot.’

‘I love Jen,’ he said, ‘but not like I loved her.’ He tilted his head and squinted his eyes. ‘With Jen it’s comfortable. With her there was something else.’

Then I told him my own story.

‘I really loved my last girlfriend. I still dream about her sometimes.’

My new friend had a knowing smile on his face.

‘But sometimes we’d get into really big fights.’

He nodded his head.

‘It was for anything. We’d fight about a movie we saw or coffee beans.’

‘Of course, coffee beans,’ he said.

‘We’d be in a grocery store whispering at each other, but it wasn’t whispering. I didn’t really care when people started looking. In the car, we could really let loose and yelled all the way home. Then we’d fight in our apartment until I couldn’t take it or she couldn’t.’

We were getting closer to the ferris wheel. There was a group of people gathered around the big ride and someone was speaking at a podium.

‘I’d always do the same thing. I’d get a bunch of beers and some smokes. I’d go to the stairs overlooking the city we lived in. I’d listen to music and sometimes I’d share drinks with the guys who lived in the park below. I’d drink the rest, smoke most of the pack, maybe all of it, and if the stores were still open I’d get more beers.’ 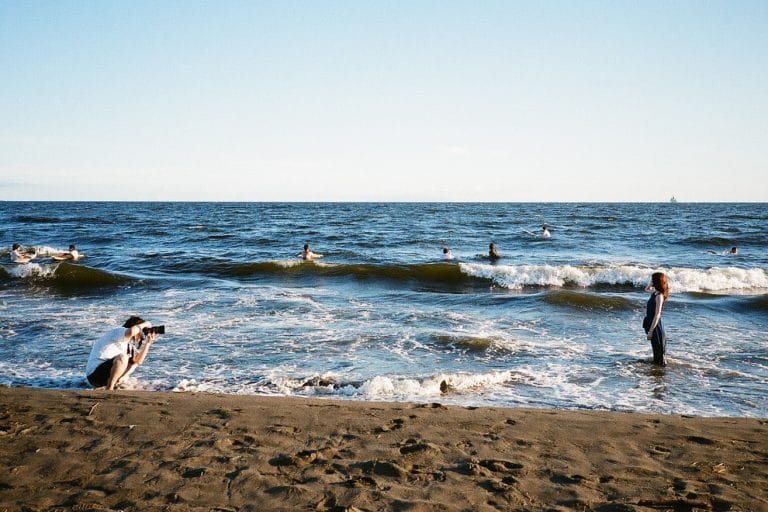 We walked toward the crowd.

‘I ended up in my bed somehow. Every time. My girlfriend would already be at work when I woke up, and I’d cook eggs because I thought food might help. I’d sit on the couch and watch TV until it was my turn to work.’

My new friend was looking toward the stage, but I kept talking anyway.

‘There was one morning that was the same, but only a little different. I woke up with red dots on my arms and face. At first, I thought I fell down and got scraped, I’d done that plenty of times, so I blinked my eyes a few times and sat up. That’s when I saw a million white pieces. Tiny things sliding down the blankets. I looked behind and they were on my pillow, sprinkled the sheets, and the lamp on my bedside table was knocked over. The lightbulb was just jagged edges around a socket. I looked closer at the scrapes on my arm and saw they weren’t scrapes at all. They were little glass slivers poking out.’

My new friend was on his toes trying to get a better look at the guy on stage.

‘I think Arnold Schwarzenegger is up there.’

‘Thank you, thank you.’ I’d recognize that voice anywhere. ‘Thank you so much for having me.’

The crowd calmed down until it was just carnival music from the ferris wheel and slow crashes of the ocean. They wanted to hear Arnold speak. Who could blame them? And yeah, I’ll admit it, I did too.