THE COLORFUL WORLD OF RAHEL

The collective was lucky to meet with the upcoming Austrian singer Rahel before the release of her new single ‘Fliegen’. Discussing her beginnings in music, the construction of a colorful world, and her inspirations, this interview opened the door to the singer’s universe.

Can you just start by telling me more about yourself? Where you are from what you do and?

I am Rahel, I come from the countryside of Austria. And I’m a musician. Voilà!

How did you get into music and the arts?

I always wanted to be on stage, I’ve known that from a very young age, like many people do, I think. And then after school I went to acting school and one day, I was acting in a play and I had some spare time in between the scenes and I was reading an article about a young musician from Vienna. And then I thought ‘you know what? I don’t want to be on stage playing a different character, I want to be on stage being me.’ That’s how it pretty much started and then I got to know my producer Raphi (Raphael Krenn), who is just the best.

And how would you describe your style?

80s influenced with a bit more of an indie approach. At least that’s what people tell me. It’s always a bit weird to describe your own style I guess, because I don’t really like to think about what I am doing. It’s a bit boring to me haha. I think my listeners could describe it and I’ll just keep making the music. Anyway, Raphi is a bit more into traditional pop. So that was interesting at first, we were both defending our own approaches. And then at some point it became a bit of a fusion of both. 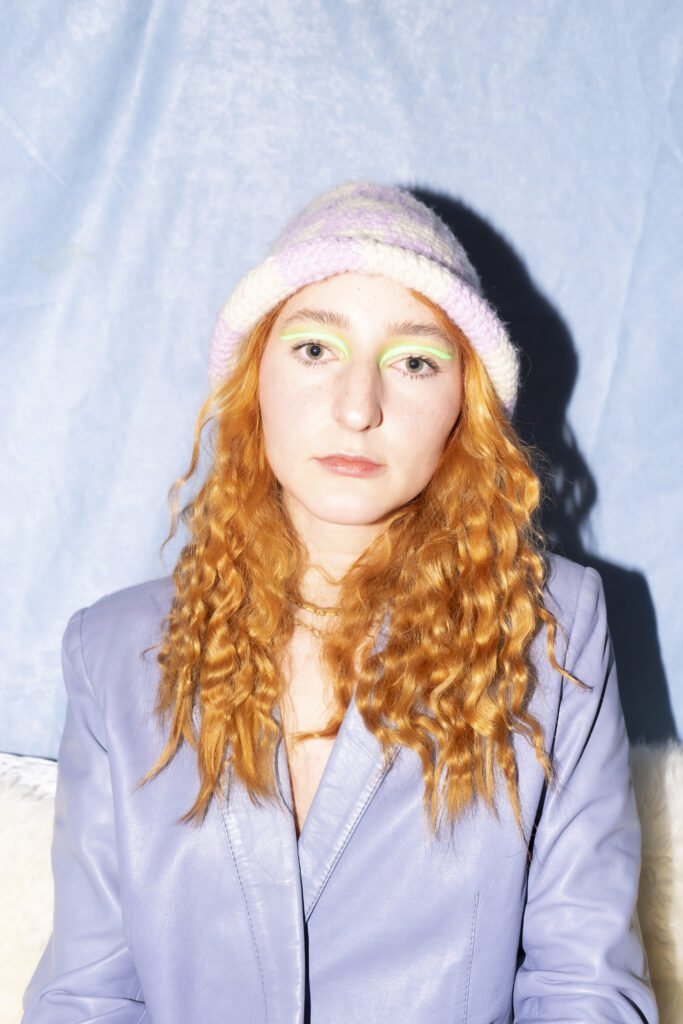 I mean this style of yours not only in your songs, but is also present in visuals. You have this like crazy 70s / 80s colourful world around you. Was it something that was always present and how important are those visuals for you?

Very important. I’m such a colourful person. Even on days when I am wearing black and also even on days when I am sad. You know I have this flower at home, it’s this fake pink flower. And one day I was dressing up the same colour as this flower and I just decided to take it with me. I don’t know, colours are so magical to me. Life is so much nicer if you take this colorful world with you. And colors are just so good for the mood.

Having seen you perform on stage, and carry out an incredible presence, I wonder what live shows mean for you and whether you think that having acted before this allowed you to feel more comfortable on stage?

I really love it. I think it can sometimes be very intense but also very nice at the same time. But acting school definitely helped me visualize the space before getting on stage, but also the way I feel with my body and the band behind me. Playing live means connecting to the people, who normally listen to my songs on Spotify. It’s lovely to see actual faces in these modern times!

Coming back to your songs, I’ve heard that the lyrics are also something that people really like about you. What are some of the recurring themes in your songs, what is it that you talk about?

You know the band Wet Leg, one of my favorites right now, well they were describing their music as sad music for party people. And I think that’s pretty accurate. So, like mostly the sound is very playful but the lyrics’ mood varies. Overall, it’s pretty much about just being an individual, a sensitive individual in this weird world. I think being sensitive should finally be normalized. One of my favorite movies is Frances Ha, it was one of the first movies that Greta Gerwig acted in and also co-directed. When I watched that movie I wrote the song Tapp Tapp Tapp which is about always tapping into little obstacles or falling in traps.

Yeah, so the movie is about the main character Greta Gerwig, running around and then eventually falling. Which sums up mostly the themes in my songs; those things that we all experience and kind of how we navigate life. 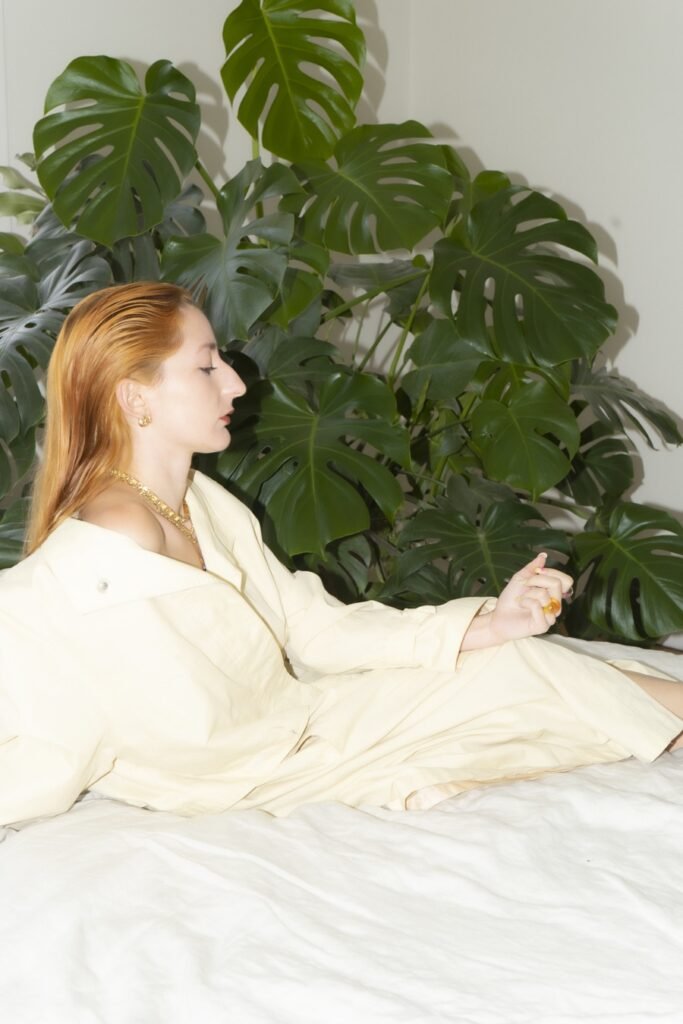 And about inspirations, do they come mainly from your own experiences?

Yes, but also all the great women, great artists. Today, I was watching a documentary about Lee Miller. I was just so inspired. I mean that’s a whole different level when you consider how extreme the situation was that she was in. But yeah… I am also inspired sometimes by a cleaning person, an animal or the color of a word that I feel when someone pronounces it. Or an idea, a smell or some kind of touch.

Now, a bit about your usual creative process. Where does it start?

It starts with Raphi in his bedroom. That sounds weird – laughs – it’s just the space where we work, I swear!

But, yes, mostly it’s him having a melody, or like a sketch and then he sends it to me and then I write something, or sometimes it’s the other way around. Sometimes we would also invent it all together. But in any case, it’s a lot of time that we spend together, moving around sounds and words. It’s just the best!

What are you working on now?

I’m always scribbling, but that’s not working, I guess, because working should always lead to a product! I actually hate the thought of needing to be productive because then I realise that I am part of this whole system. I’d prefer to be part of a team that invents funny neologisms instead of being part of neoliberalism. But oh well, right now I have a little bit more time. I’ve been spending time at my parents’ house and my mom has a little sheep in her garden. It’s adorable and I just find animals very inspiring. I feel like I can work much better in the presence of an animal and I think everyone should be able to always work near an animal. Only if the animal wants that of course. I think people would be very productive but also way happier.

Sooo we’re spending some time in the countryside working on songs!

On November 10th, I will release my new track ‘Fliegen’. Once again, it’s a sing-along melody, a hymn to being a weirdo. A song that not only understands loneliness, but even celebrates it. 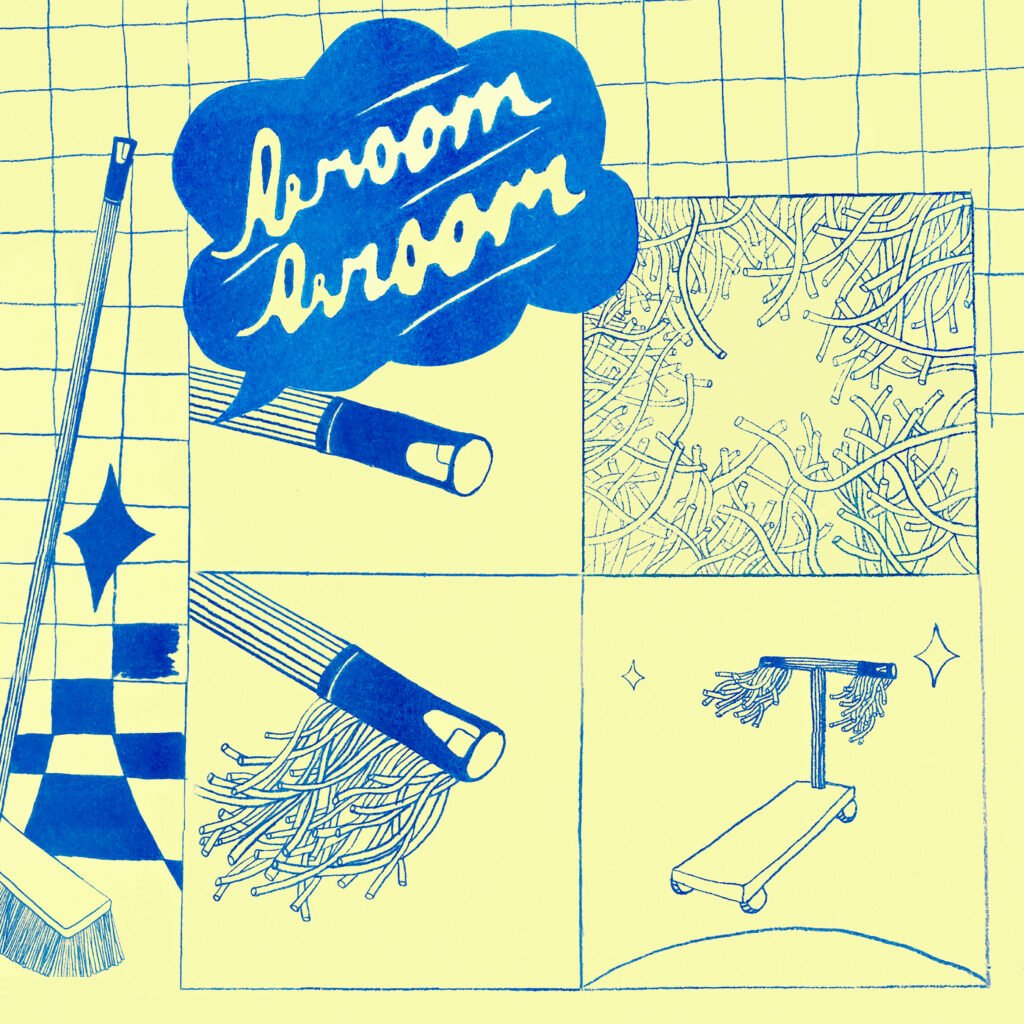 And now you are mainly based in Vienna but you also performed at festivals in Germany, how easy was it to get out of Austria?

That was quite cool actually, because I think Spotify really helped us. They put us in some nice playlist with a mainly German audience and that really helped.

And could you maybe tell us more about your label Radio International? What does it mean for you to be part of an independent label with emerging artists?

The nicest part about it is the freedom. For example, right now I have been talking with different people and institutions but most labels really take over your music. Where in Radio International there is this amazing freedom that I can just do whatever I want! I’d like to thank Christian Hummer here, who made so much possible for me. He passed away in September. There are no words.

And for our international readers, how would you describe the emerging music scene in Austria?

Wow, there are so many great artists. In the last years, German music really gained more popularity. Until recently, English lyrics were dominant but some artists like Der Nino aus Wien really helped to create a new space for German music. In the 80s, there was a lot of music with German lyrics, then that wave disappeared but now it’s back. And I think that’s very beautiful because, you know, it just makes sense to express yourself in the language that you actually can speak.

And now, as a young musician, how would you describe the scene here in Vienna?

In Vienna, the young art scene is of course not as vibrant as for example Berlin. I feel like here the circle is so small and if you know some people, then it can easily work out. And I think like in Berlin, for example, it’s just such a big city that it becomes harder to get recognized.

Also, speaking of Austrian artists, do you have any recommendations of artists to check out?

Yes! There are so many of course. I’ll name Endless Wellness and Katha Pauer, who has been living in Vienna for some time but has now moved to Berlin. Both acts are lovely.

Yeah, I say hi to the French artists out there. I was in Paris a few months ago and it was so inspiring, it’s a very cute and mysterious city. Keep up the good work and much love!