In this second edition of our favourite projects, check out some work by young artists that have caught our editors’ eyes. This week, you can learn more about talented photographer from Belgium, Aster. Followed by emerging underground UK lyricist, Feux and his latest visuals in collaboration with Big Bubba: “Sky High”. To then conclude with the international lineup of the Children of the Wind’s newest EP “RoadRunnas”.

About the artist: Photographer, Aster LAMBERT, was born in 2000 in Leuven, Belgium. She built her passion for photography through the relationship with her father, who throughout her childhood taught her how to shoot using digital and analogue cameras. Having lived in numerous places around the world “Geneva, Brussels, N.Y.C, Washington D.C and London”, the young photographer is currently doing a master’s degree in Western Literature in Brussels. For Aster, who took a long hiatus from photography, picking up her cameras again, in 2020, was somewhat natural for her, she explains to our editors “I am extremely influenced by Surrealism! I love taking pictures that at a first glance look aesthetically pleasing, but when you have a second look you realise something is off, I find that very conceptual I guess.”

About the work: Aster, a very energetic and joyful photographer whose art embodies well the individual. She sees taking pictures as a way to release stress, combining her creative talent with the friends around her who dedicate days in the week to art in any given form. Aster explains her recent work on film: “I want to be completely fluent in photography, understand how every bit works, try to use as many cameras as I can to be knowledgeable in it. So for those pictures, the mindset I had was, how technical can I get with a camera I just used. I find that really fun (she laughs).” The Belgium national’s latest project is challenging herself to learn everything there is to know about old cameras, all the way to knowing how to fix and clean them. This would give her the freedom to exploit the many functions of both digital and analogue cameras through her creations.

Find more about her work here:

About the project:  SKY HIGH, is an extract out of the project “Pure Nine” released by the promising up and coming artist from London, Feux. This new visual combined with the melody of the beat hypnotizes you from the get-go and drags you into the intimate, dark yet calming universe of the London-based artist. 6 months after the initial release of his mixtape, Feux graces his audience with his latest visuals, teaming up with the filmmaker Big Bubba, he explains: “The song “Sky High” is about the highs and lows of my experiences as a teenager, growing up and facing the world at full throttle. I also speak about how I just want to make my music and be the best person I can be for the people around me, I talk about the times working so hard and fear just to entertain people rather than make them feel something. This whole project is put into this song which is one of the climaxes of the project, this song pretty much assembles everything from the album, my uncertainties, my fears, but also my feeling of self-belief and knowing I have a bright future.”

About the artist: As a new face to the music scene, Feux has already captivated an audience with his bilingual lyrics and intricate flows over incredible instrumentals from underground London-based producers by the likes of sugi.wa and J P Rose. This has led Feux to generate his own unique style of Alternative Hip-Hop which is constantly flourishing into new and unique expressions of music, blending contemporary and old school Hip-Hop.

In a house with three older brothers, who all tried rapping before him, he grew up with music around, the likes of Eminem, Tupac and Dre playing on repeat. But, it wasn’t until his tastes were refined, preferring the alternative sounds and messages of De La Soul, A Tribe Called Quest and Most Def, and an enlightening experience with psychedelics that he was ready to start himself. Having never really done anything creative before, he recalls the flood gates being opened after making his first song, rapping for six hours straight in his room on Garage Band and his headphones mic. Feux uses French and English lyrics in his music, a credit to his Belgian family and years in French school in London. The name Feux is a giveaway to his francophone family and quite rightly translates to the plural of fire in French. The mix of culture from both sides of The Channel brings unique perspectives and styles to his music.

By Children of the Wind

About the project: The RoadRunnas EP was created during a road trip in Summer 2020, by a group of four friends, who go by the name Children of the Wind. The tape of the young artists is built around five tracks, who each have a unique vibe and feel to them, blending multiple genres together (Hip-Hop, Bedroom Pop and Dub-Hip-Hop) with conversational storytelling in English and French. This makes the Children of the Wind’s world so pleasingly uncommon and fresh in the latest releases discovered by KUMO’s editorial team.

About the artists: Children of the Wind is a new rap collective composed of Dutch producer, Teeze, Senegalese wordsmith, Loraxx, Madagascarian native MC Noga Bedo and Paris-born rapper, Lechani. The international lineup met up in New York City, and have now moved back to London after having worked on and released Teeze’s first collaborative album “Meditape”. Now coming back all together under one name, the Children of the Wind present their first EP “RoadRunnas”. 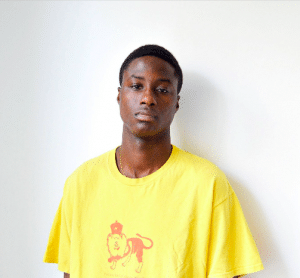 AVC also known as Christophe Sam was born on the 8 of August 1999 in Paris, France. He was raised in London, England where he attended a French international school in the heart of the city. During the summer of 2017, AVC wrote his first ever track with two friends, who’s first initials complete his stage name.

Founder of the Kumo Collective