LILY HEAD: BEHIND THE SCENES OF HER LATEST MUSIC VIDEO

By starring in her new video clip, I had the opportunity to participate in  Lily Head’s latest artistic endeavour. During our weekend-long shoot, I was gradually able to unravel the enigmatic person that Lily Head is, and in doing so I became more fascinated than ever by the upcoming singer’s work ethic, talent, and overall radiating aura. Inspired by Brussel’s soon-to-be emblematic singer, I want to share the story behind her video clip with the rest of the world. For those who appreciate RnB, NeoSoul, and a bit of Pop, Lily Head is the artist to look out for.

Half British and half Guadeloupean, Lily Head has always had a musical passion brewing within her. At the age of twenty-one, the singer decided to move to Brussels from Wallonia in order to pursue her untapped potential that could be better explored in the diversity of Brussels’ musical scene. Today, she has already released one EP and a multitude of singles. 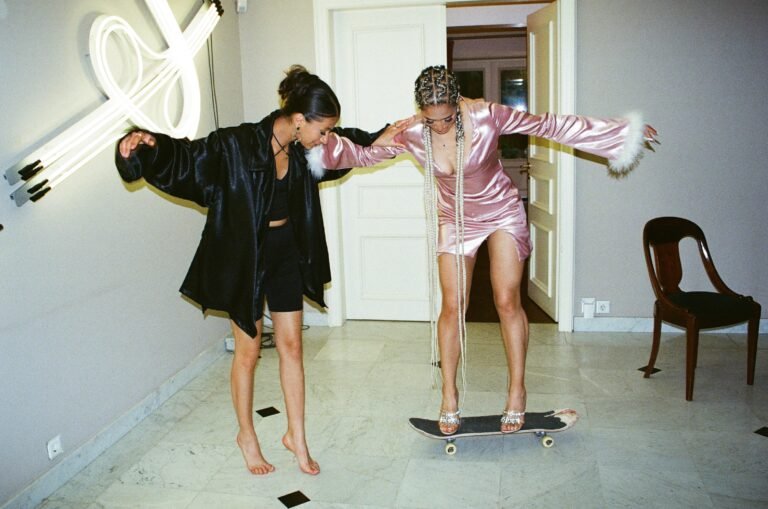 About a month ago, Lily and her team accepted the challenge of filming the entirety of her new single’s music video in just 24 hours. A few of us set out to Luxemburg, where the video was filmed. On Saturday night, where we stayed up to prepare the house and set up the lights. In the early morning hours of Sunday, the rest of her team and figurants arrived to start filming as quickly as possible. Although some may consider Lily Head as still relatively unknown, her skills, motivation, and drive prove the exact contrary. A real professional, Lily Head and her team admirably executed shooting an entire music video in about 10 hours. Ambitious, practical, and disciplined, this day perfectly demonstrated not only Lily’s Capricorn-like tendencies but also the fact that she is an artist to watch out for.

Always working on something new, Lily Head used the past confinements, quarantines, and the overall pandemic as an opportunity to rediscover herself, while simultaneously attempting to map out her imminent career. She has always stated that being surrounded by positive people is one of the driving forces in her work. Her friends and her team are a constant reminder and support for her writing and creating. This is why the global pandemic proved to be a difficult obstacle for the singer who suddenly found herself alone at home. However, Lily is difficult to keep down and no hurdle is ever too big for her. Over the past year, she has released new singles, music videos, interviews and much more.

What inspired the music video for ‘Need a Little’?

The music video was inspired by a need for ‘légereté’. Throughout this year, the thing we have craved the most is intimacy with our friends, family, and in general with the ones we love. With everything going on, covid and lockdown included, we have been missing out on that intimacy. Also, the video for ‘Need a Little’ is an equal mix of ‘bonne enfant’ and glamorous, two things that define me as a person. It is this combination of youthfulness and stylishness that indicates in which artistic direction the rest of my career is leaning towards.

Where did you pull your influences for the songwriting process?

I actually wrote this song two years ago. During this period, I was going through a lot of major changes in my life. This song marks the point of my life in which I desperately needed to reconnect with myself, by disconnecting from all my past selves. How long have you been working with your current team?

I met Mahée, one of the directors of the music video, in September 2020. We started to shoot mainly VHS videos as you can see in my previous music videos. We got along super well, and ever since we met, we are on a path to greater and better things. Eventually, Bori joined as the second director. As for my manager, we met in March 2021. Most of the members on my team I met separately; however, everyone ended up linking up and we all love one another so much. It is so easy to work with them since we are a big friend group now. They know my artistic vision by heart, so the communication goes super smoothly. Since they’re my friends as well I can tell them, without any shame, if I disagree with something. The same goes for them. So, it’s been almost a year that we have all been working together. Also, they’re all strong and independent women which is definitely a plus!

When can we await the next release?

The next release is planned for mid-September, but I cannot release a specific date yet. It’s going to consist of 7 songs (including the interlude). We will be filming music videos and promo soon, but I cannot say too much, otherwise, I’ll spoil all the fun.

What were the challenges and/or benefits of shooting a music video in such a short amount of time?

Firstly, you need a team. It is impossible to do everything by yourself. I had to learn how to delegate, and especially who to delegate certain tasks to. Thankfully, I was surrounded by only the best of people, so this was not that difficult to do at all. If you have a good team, you can do anything. It was a big challenge since it was the first time shooting such a big music video in such a short time. I wasn’t running around nor trying to control everything, everyone helped to the fullest of their capacities, it was great. I would not have done it differently, because everything went so smoothly. I got home the day after and had to ask myself, ‘did this really just happen?’. Everybody was efficient and knew what they had to do. All our efforts got perfectly translated into the result. The biggest challenge or drawback was the anxiety that I felt before filming. In the end, this anxiety was completely useless; once we started working everything fell into place. Next time I will trust the process more.